Julia Nasser
UX designer
Made with 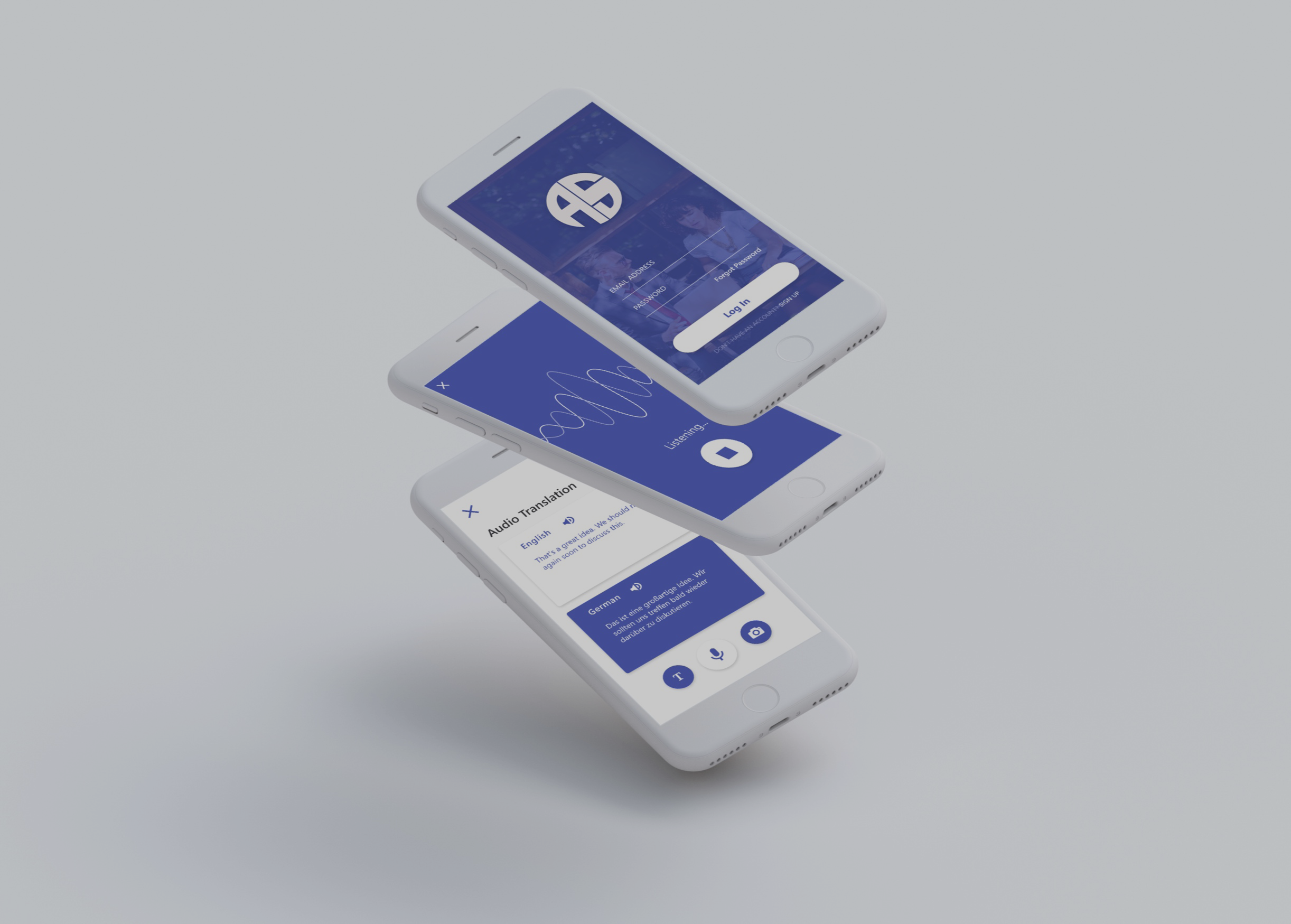 Language barriers are arguably one of the biggest struggles people face when visiting foreign countries. As the world becomes more globalized, understanding various cultures and languages is becoming more of a necessity than an option, especially for those who work abroad. In the first year of my undergrad, a group of fellow students and I designed and prototyped a concept for a mobile app that could tackle this issue. 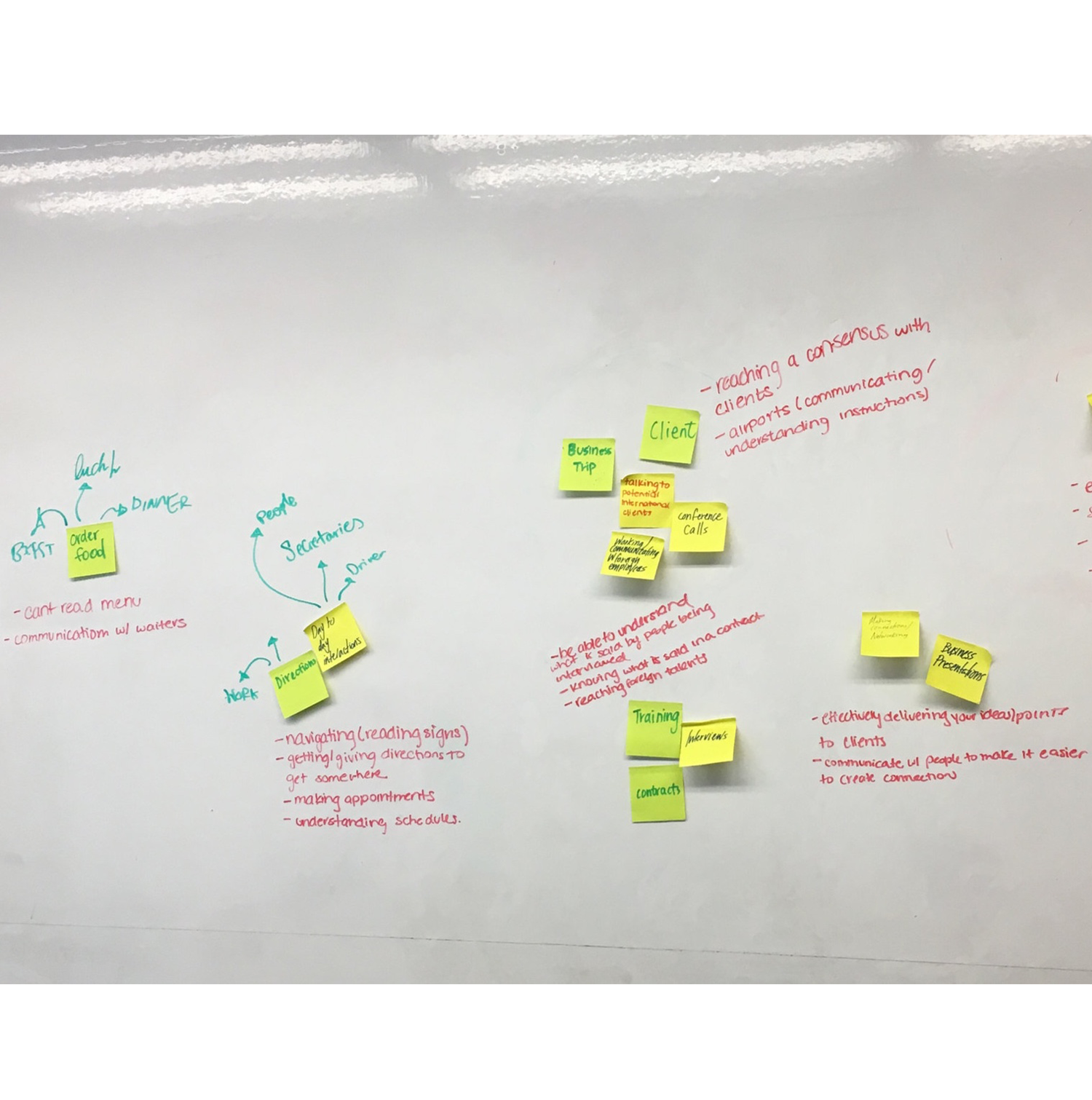 To gain a better understanding of our target audience, we first sent out surveys to contacts who had recently worked in a foreign setting and asked them questions regarding their experiences.

The survey we created was 5 questions and was hosted on Google forms. Ten people responded to the survey which gave us some basic information about our target demographic. Most respondents were males between the ages of 34 and 56, have a Bachleor's degree, and work in business or manufacturing. Some main pain points of working in a foreign setting were as follows:

Based on these results, we sought to focus on a solution that encourages smoother interactions between locals and foreigners. 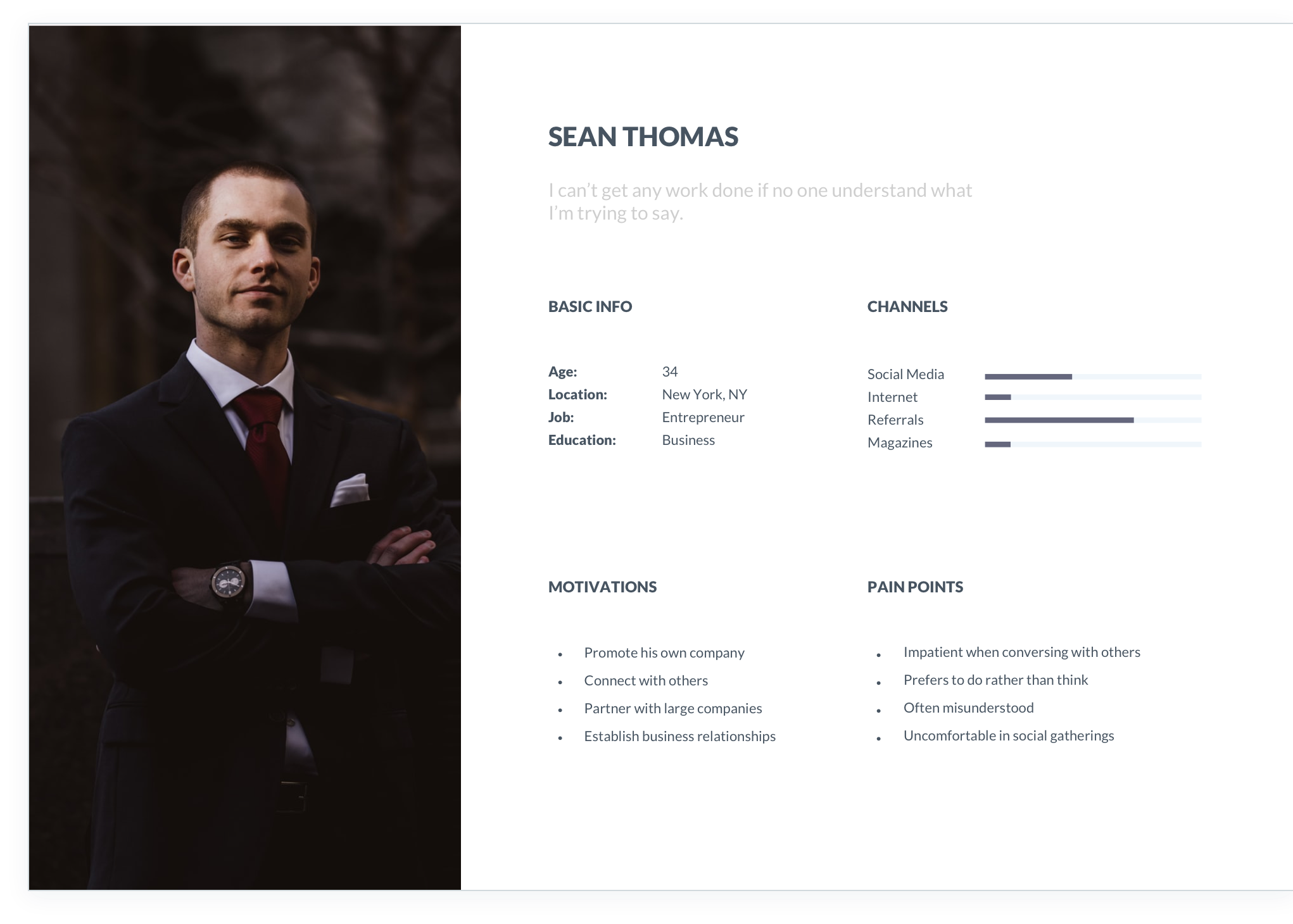 From our data, we constructed a user persona which helped us better understand our target audience. We discovered that our average user may be impatient when it comes to communication. Additionally, we were able to determine that our user group is looking for a simpler way to connect to others and work more efficiently with them.

Specifically, our persona Sean Thomas, is a businessman who is looking for a way to grow his business internationally. However, he often feels frustrated or impatient when working with foreign clients due to miscommunication.

I decided to map Sean's journey throughout a typical work day in a foreign country in order to gain a better understanding of what scenarios cause issues. Pictured below is a journey map that takes into account his emotions when dealing with difficult situations.

Taking the time to map Sean's journey helped us focus on a particular goal for this project: ensuring that conversations progress smoothly, without any hiccups or misunderstandings. 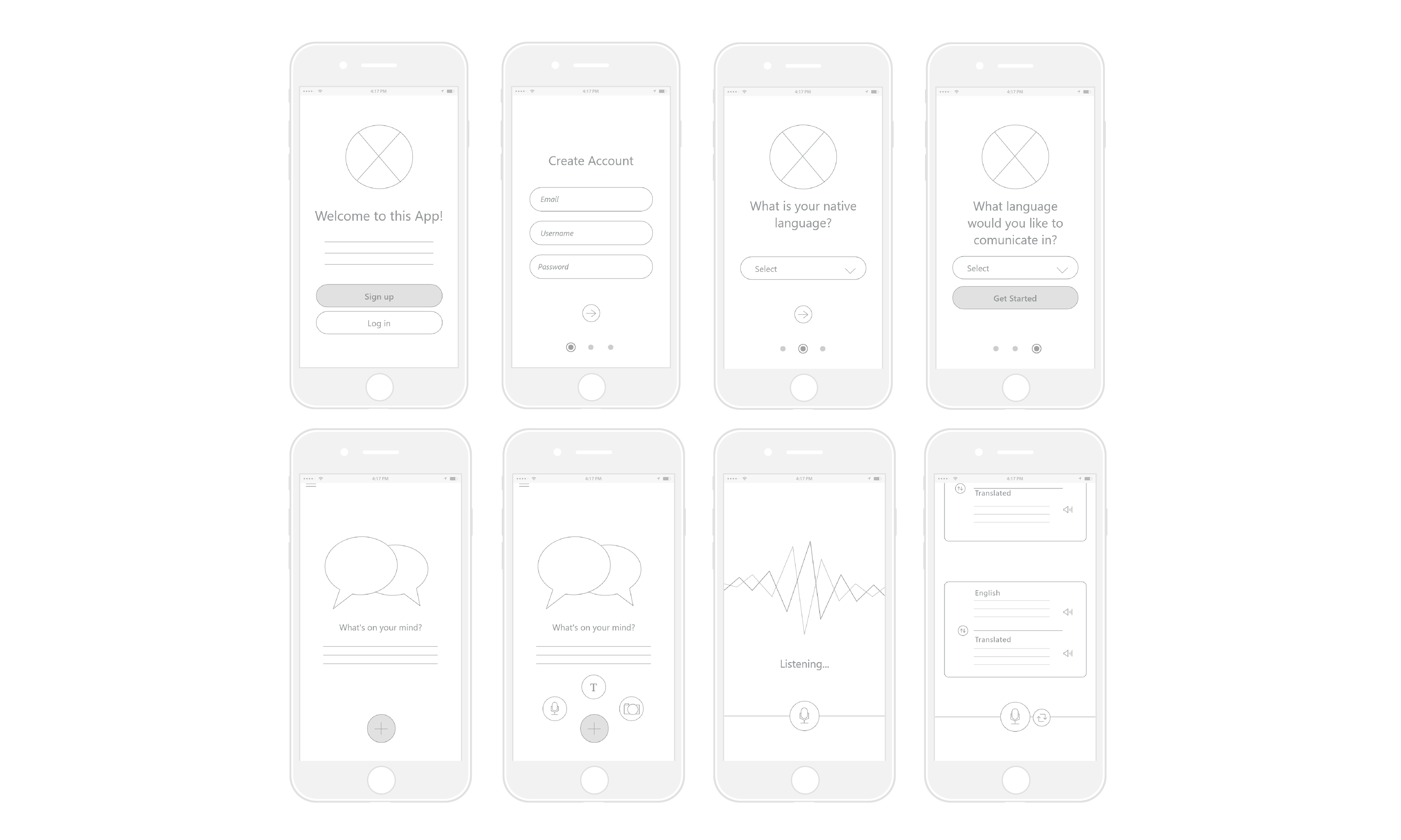 To prepare for making digital wireframes, I sketched some ideas in my notebook, asked for feedback, and relayed the suggestions to my team for our digital wireframes. Using Adobe XD, my team and I created low-fidelity wireframes of each screen. This helped us experiment with different ideas and test out our designs quickly. The next step was to test these wireframes to gather more feedback on our work.

My team and I conducted usability tests using our digital wireframes in hopes to sort out any inconsistencies between the pages. Although the testers were not our target group (they were fellow students as this was a school assignment), we still gained valuable insights on the usability and functionality of the app. Here were some of the observations we recorded: 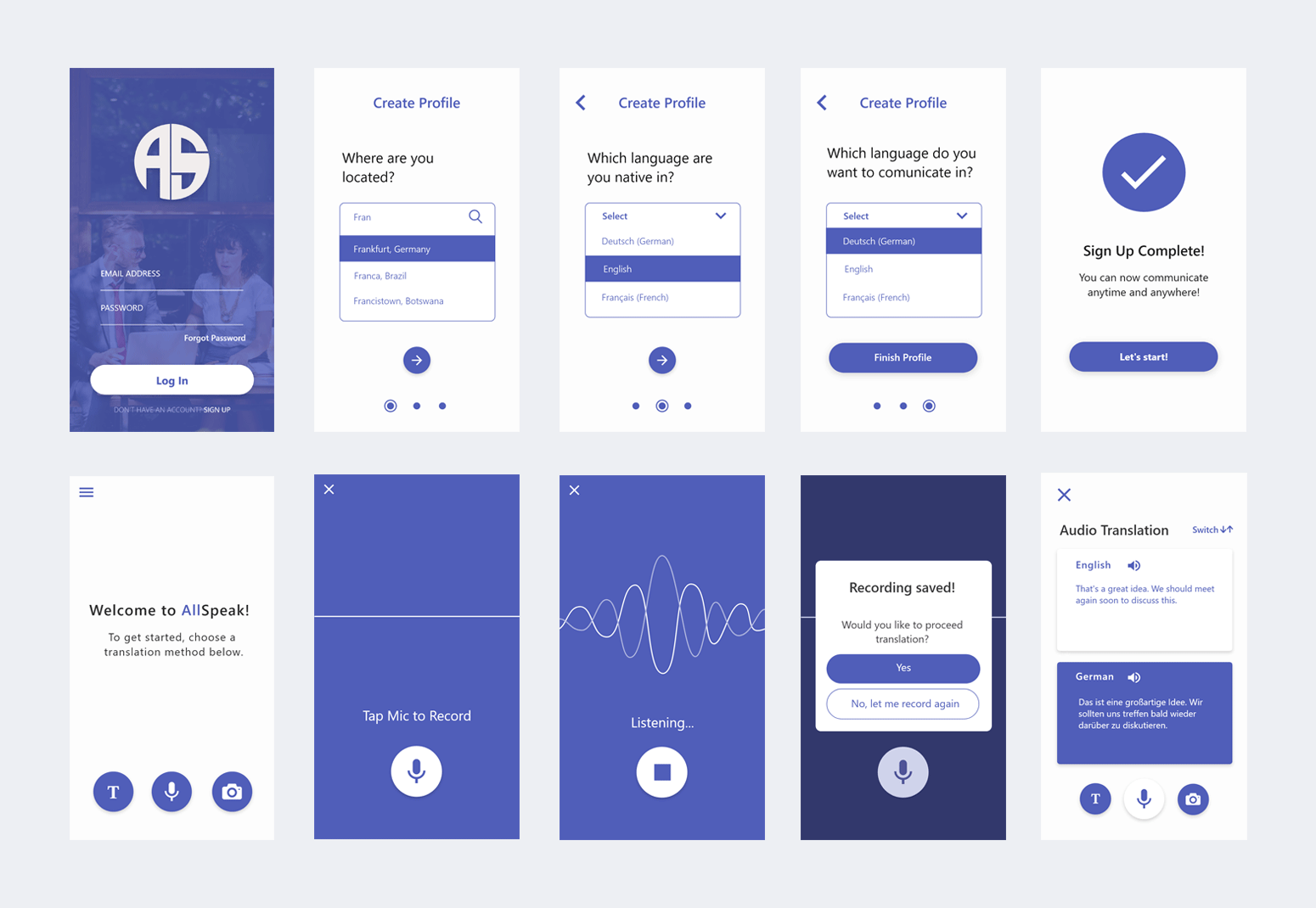 In this stage, we refined our designs and improved on the feedback that we received from testing: 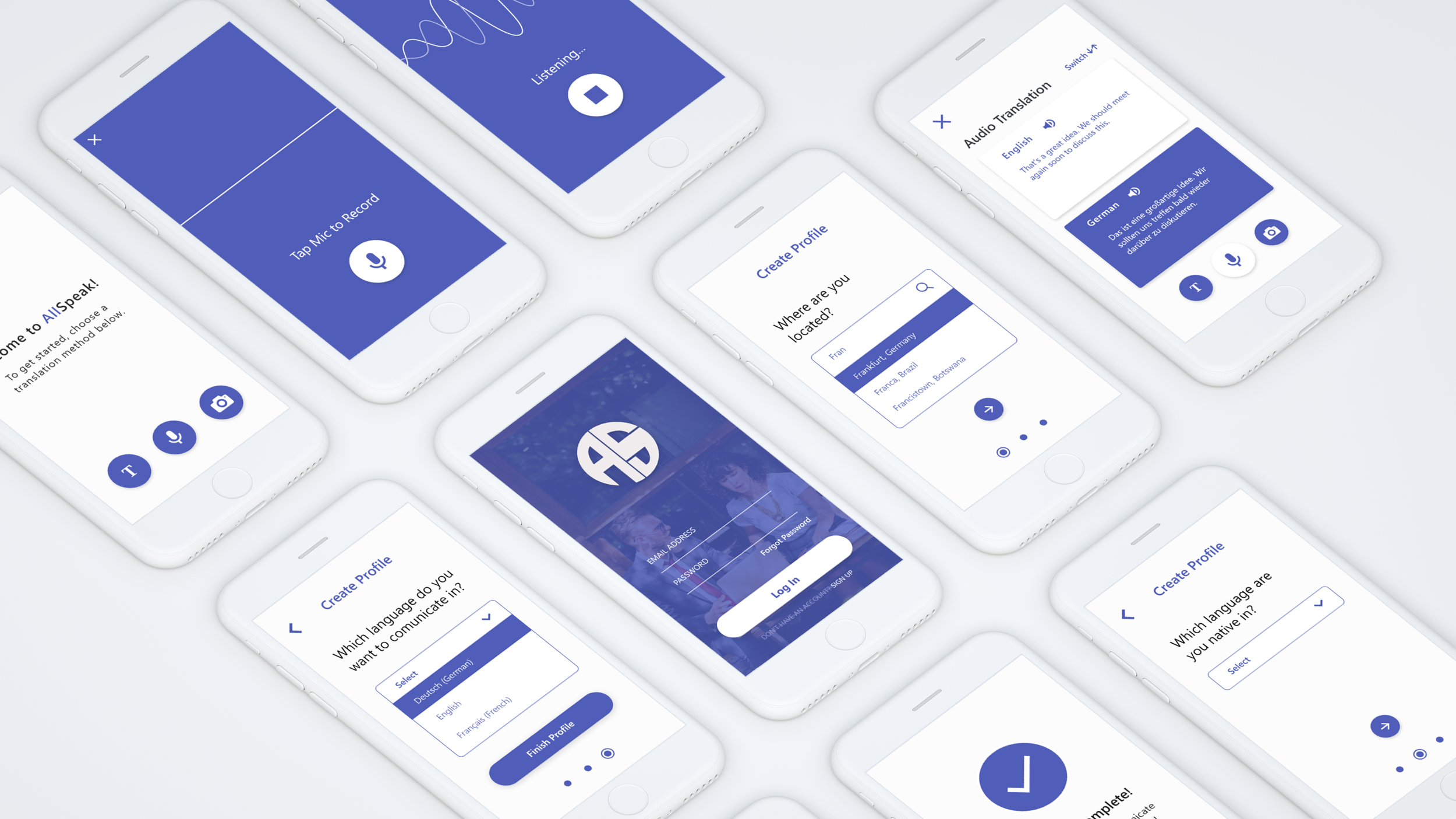 We chose blue as one of the main colours in our palette because it is associated with positivity, trust, and loyalty. These are the values we want to convey to our users since we want to portray AllSpeak as a platform that anyone can use with confidence. Dark Gray was favoured over pure black for text as it is easier on the eyes. We used light gray for accent text since it is neutral and does not overpower the other elements of the app. Lastly, we used lots of white space to give our design a cleaner, simpler look.

This project introduced me to many concepts that I had not considered before, namely on the user-research end. Before beginning this project, I specifically remember feeling stumped as to how we were supposed to design an application for a user group we knew nothing about. However, the process of conducting user interviews taught me just how much of a difference it makes when you take the time to truly understand your users’ feedback. From creating a controlled testing environment, recording video and audio for every tester, taking notes, and then implementing the feedback into our final prototype, every aspect helped tremendously in creating a final prototype that our target users could enjoy.

Another important lesson I’ve learned is that often times, the first idea you come up with is almost never the idea you will stick with to the end. At the beginning, we had many ideas on the functionality of the app, the layout, what colours and fonts we wanted to use etc. However, after conducting user interviews, we discovered that there were some aspects that made no sense and served no purpose to our target audience. In the end, this realization helped us focus more on what our target audience wanted, what they were expecting, and helped us craft an experience better suited to their needs.